Iran is located in the Middle East and has an area of 1,648,000 square kilometers. The country is bordered by Armenia, Azerbaijan, Russian Federation and Turkmenistan to the north, Afghanistan and Pakistan to the east and Iraq and Turkey to the west. To the north of the country, Iran borders the Caspian Sea with 740 km coastline. Iran also borders Persian Gulf and the Oman Sea with a long coastline of 2440 kilometers. There are various climate zones ranging from subtropical in the South to temperate in the North, with a desert zone in the middle

In 2018, Iran’s population was approximately 81 million. The population growth rate is estimated at 1% per year. 75% of the population lives in cities, while the remaining 25% live in rural.

The relevant ministry in electric energy in Iran is the Ministry of Energy (MOE). Several agencies are subordinated to the MOE in form of holding companies. According to Ministry of Energy statistics, Iran is the first rank electricity producer in the region. Total installed capacity of power plants is 80,605 MW in March 2019. Also, electricity production reached 311 TWh in March 2018, which has increased 1% compared with previous year.

On the other hand, following the restructuring of Iran's Electricity Industry and in compliance with Note 12 of Article (G) of the Budget Law of 2004, Iran Grid Management Company (IGMC) was established and became active in the second half of 2005.

Also, based on the frameworks for facilitating the participation of private sectors in thermal power generation, Thermal Power Plants Holding Company (TPPH) is responsible for organizing government activities in the field of thermal power generation; leading its subsidiaries; planning, development, management and operation of its subsidiaries’ plants based on the policies of Ministry of Energy.

Iran power grid has been connected to seven neighboring countries Afghanistan, Pakistan, Iraq, Turkey, Armenia, Azerbaijan and Turkmenistan through which exchanges energy with them. In this regard, Iran Grid Management Company is in charge for preparing the sale/purchase contracts, supervising the operation of interconnection lines, monitoring the electricity transactions, and observing their technical and economic aspects. In 2018, Iran has imported totally 2,553 GWh and also exported 6,324 GWh. 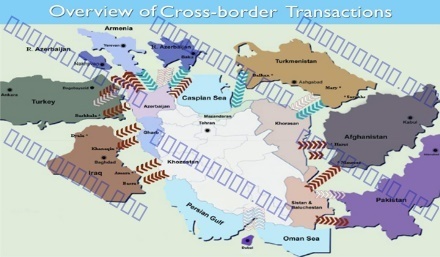 Iranian officials responded with enthusiasm to Western curiosity by reducing bureaucracy in its energy sector, streamlining its licensing process, and presenting competitive incentives to renewable energy infrastructure developers and equipment suppliers. For instance, the Renewable Energy and Energy Efficiency Organization (SATBA) modeled its new feed-in tariff policy on the German equivalent, guaranteed government purchases of power for 20 years, and introduced a 15 percent tax reduction for companies that use domestic components.

The Iranian government has already signed a series of agreements with foreign partners to facilitate development of new infrastructure and equipment production facilities.

Iran’s climate is diverse, and many of its regions are arid. Because the south, northwest and southeast regions receive around 300 days of sun per year, they are uniquely suited for solar energy. The Iranian government has prioritized the central region in particular due to its climate and proximity to the national power grid.

While Iranian policies for wind power are more aggressive in the short-term, plans for solar capacity are ambitious in the long-term. An additional 1,000 MW of solar capacity has been proposed by a consortium of Iranian, Indian and South Korean companies as part of a 10,000 MW “energy park” in the southwest, oil-rich Iranian province of Khuzestan.

The heavy involvement of foreign partners in solar projects is practical, as well as economical. A lack of access to key solar technologies like inverters for voltage control and appropriately advanced semiconductors has presented logistical challenges to domestic Iranian companies. With the recent removal of sanctions, Iranian companies now have greater access to a wider range of increasingly sophisticated solar technologies and financing to purchase and develop them. The immediate benefits will be their rapid installation and, in the long-term, the country is likely to benefit from gaining the ability to produce a significant amount of its solar infrastructure domestically.

Share it:
subscribe
Error Report
Your Comment Rules to send Comments
Please do not write in Latin letters (Finglish).
Avoid posting comments unrelated to the news, repeating others' opinions, insulting other users, and posting long texts.
Please do not disrespect, slander and insult officials, minorities, ethnicities, etc., and generally do not contradict the moral principles and laws of the country.
Otherwise, "Burgh News" will reject the desired article or publish it with an audit at its own discretion.